Jewish (or Jew-ish!) Wedding Music for your Procession or Recession 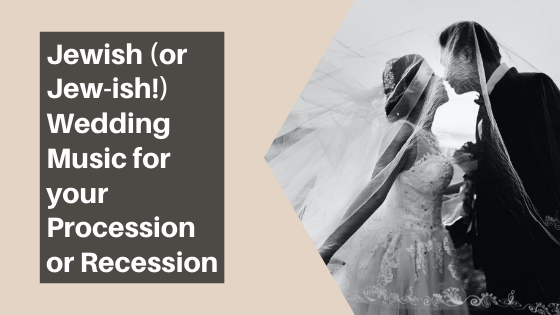 As a Cantor, one of my life passions is (obviously!) Jewish Music. Between growing up with the sounds of Ashkenazi (Eastern European) Jewish music, Israeli Hassidic Music Festivals, Jewish Folk Music, entering Cantorial School and learning a host of Jewish Music from around the world, my ears ring and resonate with the sound. Having said that, we’re here to talk about music that speaks to you and your ceremony, not mine! Many couples with whom I work often have already planned the music for their ceremony, especially the processional and recessional. By that time, I can only offer so much advice. If you haven’t yet picked out music for your ceremony, I’m here to offer some input, advice, and maybe light a creative spark for you to add yet another element of beauty and romance.

Scroll down to the end of this post to see a Spotify playlist I created with all the songs I’m going to mention in this blog post!

Many weddings have “milling around” music before the actual ceremony begins. Whether you have a DJ, band, or small ensemble, your music folks will most likely have a list of “top ten” songs they play at their weddings. The milling around music can reflect the ceremony to come, but by and large, your guests aren’t even paying much attention at that point. But once the ceremony begins—and you’ll know because we all start walking down the aisle!—people start to pay attention quite quickly. Bear in mind, no matter how large your wedding party is, the procession goes pretty quickly, and you’ll probably only have enough time for one song for the whole bridal party until the entrance of the bride. Here are some song suggestions for your procession, any of which can be either instrumental or sung:

Of course, these are just a few suggestions if you’re looking for something specifically Jewish. I can always talk with you about some “Jew-ish” or even non-religious choices for songs. The only caveat I offer to couples is that although your ceremony should be fun and light, it should have a little gravity to it, reflecting the importance of your Big Day. In other words, I’d stay away from novelty songs or songs that are “kitchy.”

Entrance of the Bride (or Groom! Or…)

When you—the people of honor—make your entrance, you might be doing so in the “traditional” way (the Bride’s entrace where people stand up), or if you’re a different kind of couple (two brides, two grooms, want to change things up…), there’s an opportunity to get in a second song for the procession before the ceremony begins in earnest. This can be something more personal to you, like a song from your childhood, formative years, or something sentimental that speaks to you as a couple. It’s also sometimes a nice touch to have this song sung along with your music instead of just instrumental. We can talk together about what would fit the mood and be most appropriate.

If you elect to do the circling ceremony during a Jewish wedding, this would be a third song to include. Feel free to use one of the processional songs listed above, as the circling tends to be a more traditional Jewish element to the ceremony.

When you get to the end of the ceremony, a lot of built up tension has grown, and you need a musical release to go along with the big kiss and the smashing of the glass. Here’s some ideas for you:

So you didn’t grow up at a synagogue, never got the bug for Jewish music, or just like more modern music in general. Over the years, I’ve heard a lot of romantic music used at ceremonies. There are trends (back in the 1980’s the Theme Song to Ice Castles was popular at weddings!), but you’re not limited to the “Top 100 Wedding Songs of All Time.” It’s all about appropriateness and how you feel. Here’s a list of songs you can use for processionals or recessionals that might add to your Big Day:

A Song Not To Use

So there’s one song that I not only excluded from above, but actually warn people against using, and that’s Treulich gefuhrt ziehet dahin. Even if you spoke German, you might not recognize the title, but if you heard it once, you’d know it instantly as the Wedding March (“Here Comes the Bride…”) from Lohengrin, by Richard Wagner. It’s the last song in the playlist below. What’s wrong with it? Richard Wagner was not only known for his prowess at composing operas and such, but also for his blatantly anti-Semitic views. Even if you and your partner don’t associate the song with Wagner and his views, I’m bound to bet there will be some among your guests and family do so. With so many other options out there, there’s no real need to include that song.

Just click below on the songs and start to get in the mood! Have a suggestion to add to the list, Jewish or otherwise? Email me and I’ll include it!